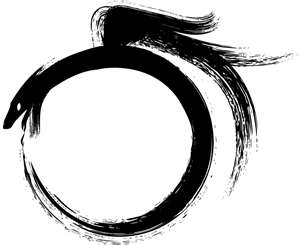 Perhaps I should have begun at the ending instead of the beginning.  Is not the end the beginning and vice versa?  Paradoxically?  Time is vicious circle, a serpent eating its own tail, the Ouroboros, correct?

Yes, I have still have faith left somewhere in my heart, God.  But the enthusiasm with which I began this project, a project I believed (but now doubt) you have given me as an assignment, is waning majorly today.  Yesterday I lost a bunch of writing that somehow didn’t get saved by the darn autosave.  Today I awoke from long and deep sleep feeling completely empty, alone and full of doubt.

I just don’t believe I am the right one for this, Father.  Why have you given this to me to accomplish?  Yes, I can type.  But I am certainly not a professional writer.  Yes, you have taught me much and I have pretty well-functioning verbal receptor sites, but I am not an expert in the matters of which you want me to write.

I am filled with doubt, Lord.  My doubt is just as strong as my faith.  I am a recovering Existentialist, as you know, in addition to having strong Buddhist tendencies.  Is this all illusion?  Trick of the light?

I don’t know anything.

I have had the thought that maybe through the synchronicites you are proving your existence, that since-for whatever reason (surely you have your reasons?)- you are unable to just appear directly in front of our faces speaking English, so you speak in code through numbers and strange ‘coincidences.’

I have thought, and occasionally believed, that, if I logged and listed all of the 200 plus cash register synchronicities I have collected and stored in the Emergen-C boxes, your coded message would become apparent.

I have had the grandiose idea that once and for all I could end the whole debate about whether you exist or not.  Have I had this thought simply because I want (and need) my life to mean something and have importance?  Am I just compensating for feelings of insignificance and purposelessness?  Am I seeing order and meaning where there is none?

Do you hear me, God?  Are you really there?

That is the fifth time I have typed in synchronicity number 63.  It, and much else that I wrote yesterday, did not get saved.  I hope that’s the last time I have to type that one.  Dear God, please save it, please save all of this, please save me, get me through this, will you?  Because now that I have begun it I must finish it, that’s just how I am, which you probably already know if you really exist.  Grant me the strength to finish it, please Father.  Grant me the strength to go back to work at The Unique American Grocery Store  this evening for another soul-sucking 5pm-12am shift and be the kind-hearted, friendly and hard-working person I usually am.

64. 7-22-11: back to back purchases from the same customer- (sometimes customers divide their orders into two separate purchases, as you will know already if you’ve ever worked at a Unique American Grocery Store)- $22.00 followed by $30.00

Synchronicity IS coincidence.  But it is not ‘mere coincidence.’  It is coincidence with meaning.  It just jumps out at the mind and gives one an impression of obvious significance.  The probability, the odds against such a coincidence occurring are so great, that the mind just automatically concludes that something beyond mere chance and randomness is at play.  That is synchronicity in a nutshell, is it not?

“15. The Sybyl of Cumae protected the Roman Republic and gave timely warnings.  In the first century C.E. she foresaw the murders of the Kennedy brothers, Dr. King and Bishop Pike.  She saw the two common denominators in the four murdered men: first, they stood in defense of the liberties of the Republic; and second, each man was a religious leader.  For this they were killed.  The Republic had once again become an empire with a caesar.  ‘The Empire never ended.'”

What do you know about Numerology?  I can tell you a bit about it, for I was compelled to learn about it after the synchronicities with 33 and 22 I experienced.

Here I will introduce you to my little Numerology card.  Numerology Card meet the World, World- Numerology Card.  Yes, the little sucker does appear a bit frayed at the edges after all these years- I bought it at Pyramid Books in Salem around 1999, I believe- but World, I must say, you’re looking pretty worn-out yourself these days.  But, like the little old Numerology Card, you’re still full of meaning and information, still a delight to have around.

“16. The Sybyl said in March 1974, ‘The conspirators have been seen and they will be brought to justice.’  She saw them with the third or ajna eye, the Eye of Shiva which gives inward discernment, but which when turned outward blasts with desiccating heat.  In August 1974 the justice promised by the Sibyl came to pass.

18. Real time ceased in 70 C.E. with the fall of the temple at Jerusalem.  It began again in 1974 C.E.  The intervening period was a perfect spurious interpolation aping the creation of the Mind.  ‘The Empire never ended,’ but in 1974 a cypher was sent out as a signal that the Age of Iron was over; the cypher consisted of two words: KING FELIX, which refers to the Happy (or Rightful) King.

19. The two-word cypher signal KING FELIX was not intended for human beings but for the descendents of Ikhnaton, the three-eyed race which, in secret, exists within us.”